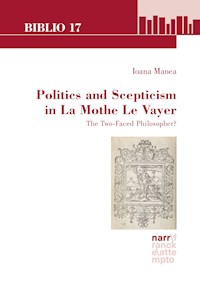 The book aims at bringing a significant contribution to the study of a prestigious figure of the French 17th century who, thanks to his intellectual achievements, became involved with the leading politicians of the time, including Cardinal Richelieu and the future Louis XIV. Unlike the previous critical studies about La Mothe Le Vayer, the book does not study exclusively the works in which he seemed to undermine the political order, but also takes into account the series of educational treatises that he wrote for the prince between 1640-1658. Adopting an interdisciplinary approach, which involves philosophical and literary concepts, the book is likely to deal with a question that could not be more relevant nowadays: should an intellectual who perceives the failings of the political order withdraw into the solitude of his library or get involved in politics in order to try to improve it?