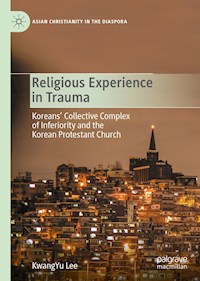 This book offers a psychohistorical analysis of the rapid growth of the Korean Protestant Church. KwangYu Lee looks at some of the traumatic historical events of Korea in the 20th century, including the fall of the Joseon Dynasty (1392-1910), the Japanese Occupation (1910-1945), the Korean War (1950-1953), and the Korean Military Dictatorship (1961-1987), and explores the psychological impacts of these events on the collective unconsciousness of Koreans. He argues that Koreans’ collective (or cultural) complex of inferiority, which was caused and gradually exacerbated by these traumatic events, along with their psychological relationships with their two colonizers—the Japanese and Americans—prompted them to convert to Korean Protestantism en masse as a means to avoid their psychological pains and to fulfil their futile desire to become like Americans, their overtly idealized psychological-object.