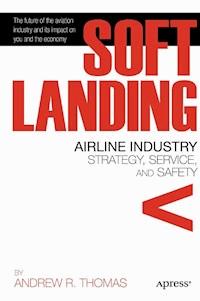 Soft Landing: Airline Industry Strategy, Service, and Safety covers the immediate past, present, and future of the airline industry and its effects on consumers and the economy.

Aviation receives a disproportionate amount of news coverage in the popular press—not to mention chatter at cocktail parties and workplaces around the world. And why not? Aviation represents a sector of the U.S economy, for example, exceeded in size only by the real estate, healthcare, and automotive industries. Furthermore, hundreds of millions of people fly each year, including 80 million Americans.

So we all have airline stories—experiencing a delay and losing a business deal, spending a night or three in the airport, dealing with ornery airline personnel, losing money on airline stocks, or being involved in a near miss. (Or, as George Carlin more accurately put it, a “near hit.”)

But things might be on the upswing. Knocked to its knees by 9/11 and a decade of falling revenue and rising losses, the industry’s “flying cheap” strategy and organizational efficiencies based partly on outsourcing have appear to have helped passengers and profitability return. As this book explains, we can look forward to better technology and infrastructure, speedier—and easier—travel, more effective and less invasive security measures, and more jobs in the air and on the ground.

Turbulence is always a possibility. Rising fuel costs, economic uncertainty, and future terror attacks could cause tumult once again. Plus, airline companies intend to charge us extra for everything from the weight of our own bodies to use of the bathroom. But as the industry has discovered, we’ll put up with that—and more—if we can make it to our destinations with bags intact and a smaller dent in our wallets.