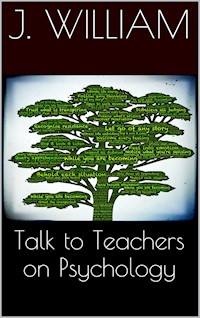 Talks To Teachers On Psychology E-Book

Man is an organism for reacting on impressions: his mind is there to help determine his reactions, and the purpose of his education is to make them numerous and perfect. Our education means, in short, little more than a mass of possibilities of reaction, acquired at home, at school, or in the training of affairs. The teacher's task is that of supervising the acquiring process. This being the case, I will immediately state a principle which underlies the whole process of acquisition and governs the entire activity of the teacher. It is this: Every acquired reaction is, as a rule, either a complication grafted on a native reaction, or a substitute for a native reaction, which the same object originally tended to provoke. The teacher's art consists in bringing about the substitution or complication, and success in the art presupposes a sympathetic acquaintance with the reactive tendencies natively there. 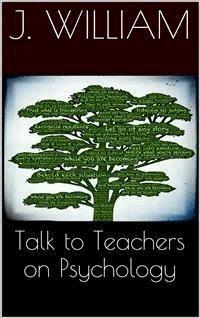 Talks To Teachers On Psychology

Talks To Teachers On Psychology

I. PSYCHOLOGY AND THE TEACHING ART

II. THE STREAM OF CONSCIOUSNESS

III. THE CHILD AS A BEHAVING ORGANISM

I wish now to continue the description of the peculiarities of the stream of consciousness by asking whether we can in any intelligible way assign itsfunctions.

Can we say which of these functions is the more essential?

An old historic divergence of opinion comes in here. Popular belief has always tended to estimate the worth of a man's mental processes by their effects upon his practical life. But philosophers have usually cherished a different view. "Man's supreme glory," they have said, "is to be arationalbeing, to know absolute and eternal and universal truth. The uses of his intellect for practical affairs are therefore subordinate matters. 'The theoretic life' is his soul's genuine concern." Nothing can be more different in its results for our personal attitude than to take sides with one or the other of these views, and emphasize the practical or the theoretical ideal. In the latter case, abstraction from the emotions and passions and withdrawal from the strife of human affairs would be not only pardonable, but praiseworthy; and all that makes for quiet and contemplation should be regarded as conducive to the highest human perfection. In the former, the man of contemplation would be treated as only half a human being, passion and practical resource would become once more glories of our race, a concrete victory over this earth's outward powers of darkness would appear an equivalent for any amount of passive spiritual culture, and conduct would remain as the test of every education worthy of the name.

It is impossible to disguise the fact that in the psychology of our own day the emphasis is transferred from the mind's purely rational function, where Plato and Aristotle, and what one may call the whole classic tradition in philosophy had placed it, to the so long neglected practical side. The theory of evolution is mainly responsible for this. Man, we now have reason to believe, has been evolved from infra-human ancestors, in whom pure reason hardly existed, if at all, and whose mind, so far as it can have had any function, would appear to have been an organ for adapting their movements to the impressions received from the environment, so as to escape the better from destruction. Consciousness would thus seem in the first instance to be nothing but a sort of super-added biological perfection,—useless unless it prompted to useful conduct, and inexplicable apart from that consideration.

Deep in our own nature the biological foundations of our consciousness persist, undisguised and undiminished. Our sensations are here to attract us or to deter us, our memories to warn or encourage us, our feelings to impel, and our thoughts to restrain our behavior, so that on the whole we may prosper and our days be long in the land. Whatever of transmundane metaphysical insight or of practically inapplicable æsthetic perception or ethical sentiment we may carry in our interiors might at this rate be regarded as only part of the incidental excess of function that necessarily accompanies the working of every complex machine.

I shall ask you now—not meaning at all thereby to close the theoretic question, but merely because it seems to me the point of view likely to be of greatest practical use to you as teachers—to adopt with me, in this course of lectures, the biological conception, as thus expressed, and to lay your own emphasis on the fact that man, whatever else he may be, is primarily a practical being, whose mind is given him to aid in adapting him to this world's life.

In the learning of all matters, we have to start with some one deep aspect of the question, abstracting it as if it were the only aspect; and then we gradually correct ourselves by adding those neglected other features which complete the case. No one believes more strongly than I do that what our senses know as 'this world' is only one portion of our mind's total environment and object. Yet, because it is the primal portion, it is thesine qua nonof all the rest. If you grasp the facts about it firmly, you may proceed to higher regions undisturbed. As our time must be so short together, I prefer being elementary and fundamental to being complete, so I propose to you to hold fast to the ultra-simple point of view.

The reasons why I call it so fundamental can be easily told.

First, human and animal psychology thereby become less discontinuous. I know that to some of you this will hardly seem an attractive reason, but there are others whom it will affect.

Second, mental action is conditioned by brain action, and runs parallel therewith. But the brain, so far as we understand it, is given us for practical behavior. Every current that runs into it from skin or eye or ear runs out again into muscles, glands, or viscera, and helps to adapt the animal to the environment from which the current came. It therefore generalizes and simplifies our view to treat the brain life and the mental life as having one fundamental kind of purpose.

Third, those very functions of the mind that do not refer directly to this world's environment, the ethical utopias, æsthetic visions, insights into eternal truth, and fanciful logical combinations, could never be carried on at all by a human individual, unless the mind that produced them in him were also able to produce more practically useful products. The latter are thus the more essential, or at least the more primordial results.

Fourth, the inessential 'unpractical' activities are themselves far more connected with our behavior and our adaptation to the environment than at first sight might appear. No truth, however abstract, is ever perceived, that will not probably at some time influence our earthly action. You must remember that, when I talk of action here, I mean action in the widest sense. I mean speech, I mean writing, I mean yeses and noes, and tendencies 'from' things and tendencies 'toward' things, and emotional determinations; and I mean them in the future as well as in the immediate present. As I talk here, and you listen, it might seem as if no action followed. You might call it a purely theoretic process, with no practical result. But itmusthave a practical result. It cannot take place at all and leave your conduct unaffected. If not to-day, then on some far future day, you will answer some question differently by reason of what you are thinking now. Some of you will be led by my words into new veins of inquiry, into reading special books. These will develop your opinion, whether for or against. That opinion will in turn be expressed, will receive criticism from others in your environment, and will affect your standing in their eyes. We cannot escape our destiny, which is practical; and even our most theoretic faculties contribute to its working out.

These few reasons will perhaps smooth the way for you to acquiescence in my proposal. As teachers, I sincerely think it will be a sufficient conception for you to adopt of the youthful psychological phenomena handed over to your inspection if you consider them from the point of view of their relation to the future conduct of their possessor. Sufficient at any rate as a first conception and as a main conception. You should regard your professional task as if it consisted chiefly and essentially intraining the pupil to behavior; taking behavior, not in the narrow sense of his manners, but in the very widest possible sense, as including every possible sort of fit reaction on the circumstances into which he may find himself brought by the vicissitudes of life.

The reaction may, indeed, often be a negative reaction.Notto speak,notto move, is one of the most important of our duties, in certain practical emergencies. "Thou shalt refrain, renounce, abstain"! This often requires a great effort of will power, and, physiologically considered, is just as positive a nerve function as is motor discharge.

In our foregoing talk we were led to frame a very simple conception of what an education means. In the last analysis it consists in the organizing ofresourcesin the human being, of powers of conduct which shall fit him to his social and physical world. An 'uneducated' person is one who is nonplussed by all but the most habitual situations. On the contrary, one who is educated is able practically to extricate himself, by means of the examples with which his memory is stored and of the abstract conceptions which he has acquired, from circumstances in which he never was placed before. Education, in short, cannot be better described than by calling itthe organization of acquired habits of conduct and tendencies to behavior.To illustrate. You and I are each and all of us educated, in our several ways; and we show our education at this present moment by different conduct. It would be quite impossible for me, with my mind technically and professionally organized as it is, and with the optical stimulus which your presence affords, to remain sitting here entirely silent and inactive. Something tells me that I am expected to speak, and must speak; something forces me to keep on speaking. My organs of articulation are continuously innervated by outgoing currents, which the currents passing inward at my eyes and through my educated brain have set in motion; and the particular movements which they make have their form and order determined altogether by the training of all my past years of lecturing and reading. Your conduct, on the other hand, might seem at first sight purely receptive and inactive,—leaving out those among you who happen to be taking notes. But the very listening which you are carrying on is itself a determinate kind of conduct. All the muscular tensions of your body are distributed in a peculiar way as you listen. Your head, your eyes, are fixed characteristically. And, when the lecture is over, it will inevitably eventuate in some stroke of behavior, as I said on the previous occasion: you may be guided differently in some special emergency in the schoolroom by words which I now let fall.—So it is with the impressions you will make there on your pupil. You should get into the habit of regarding them all as leading to the acquisition by him of capacities for behavior,—emotional, social, bodily, vocal, technical, or what not. And, this being the case, you ought to feel willing, in a general way, and without hair-splitting or farther ado, to take up for the purposes of these lectures with the biological conception of the mind, as of something given us for practical use. That conception will certainly cover the greater part of your own educational work.