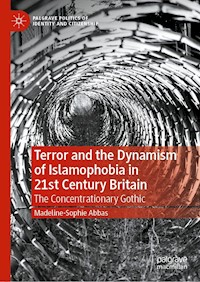 This book provides powerful insights into the dynamics, nature, and experiences of the terrors of counter-terrorism measures in the UK. Abbas links her analysis to wider concerns of nation construction and belonging; racial profiling and policing; the state of exception and pre-emptive counter-terrorism measures; community-based counter-terrorism measures; and restrictions to political engagement, freedom of speech and hate speech. What makes this work distinct is its advancement of an original framework - the Concentrationary Gothic - to delineate the racialised mechanisms of terror involved in the governance of Muslim populations in the ‘war on terror’ context.

The book illuminates the various ways in which Muslims in Britain experience terror through racialised surveillance and policing strategies operating at state, group (inter- and intra-), and individual levels in diverse contexts such as the street, workplace, public transport and the home.  Abbas situates these experiences within wider racial politics and theory, drawing connections to anti-Semitism, anti-blackness, anti-Irishness and whiteness, to provide a complex mapping of the ways in which racial terror has operated in both historical and contemporary contexts of colonialism, slavery, and the camp, and offering a unique point of analysis through the use of Gothic tropes of haunting, monstrosity and abjection. This vital work will be of interest to students and scholars across sociology, criminology, anthropology, terrorism studies, Islamic studies, and critical Muslim studies, researching race and racialisation, security, immigration, nationhood and citizenship.