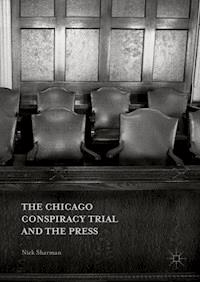 The Chicago Conspiracy Trial and the Press E-Book

This book analyzes the newspaper coverage of one of America’s most famous and dramatic trials–the trial of the “Chicago 8.” Covering a five month period from September 1969 to February 1970 the book considers the way eight radical activists including Black Panther leader Bobby Seale, antiwar activists Tom Hayden, David Dellinger, and Rennie Davis, and leading Yippies, Abbie Hoffman and Jerry Rubin are represented in the press. How did the New York Times represent Judge Hoffman’s decision to chain and gag Bobby Seale in the courtroom for demanding his right to represent himself? To what extent did the press adequately describe the injustice visited on the defendants in the trial by the presiding Judge, Julius J Hoffman? The author aims to answer these questions and demonstrate the press’s reluctance to criticize Judge Hoffman in the case until the evidence of his misconduct of the trial became overwhelming.