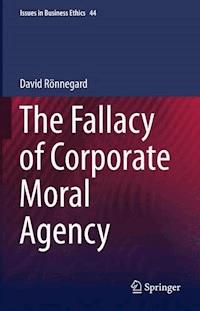 It is uncontroversial that corporations are legal agents that can be held legally responsible, but can corporations also be moral agents that are morally responsible? Part one of this book explicates the most prominent theories of corporate moral agency and provides a detailed debunking of why corporate moral agency is a fallacy. This implies that talk of corporate moral responsibilities, beyond the mere metaphorical, is essentially meaningless. Part two takes The Fallacy of Corporate Moral Agency as its premise and spells out its implications. It shows how prominent normative theories within Corporate Social Responsibility, such as Stakeholder Theory and Social Contract Theory, rest on an implicit assumption of corporate moral agency. In this metaphysical respect such theories are untenable. In order to provide a more robust metaphysical foundation for corporations the book explicates the development of the corporate legal form in the US and UK, which displays how the corporation has come to have its current legal attributes. This historical evolution shows that the corporation is a legal fiction created by the state in order to serve both public and private goals. The normative implication for corporate accountability is that citizens of democratic states ought to primarily make calls for legal enactments in order to hold the corporate legal instruments accountable to their preferences.