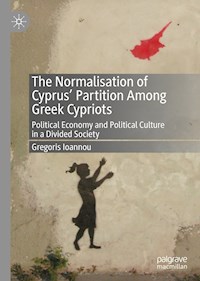 The Normalisation of Cyprus’ Partition Among Greek Cypriots E-Book

This book explores the basic dynamics that shaped the Cyprus problem, with a focus on recent decades. The author deals with the periods, nodal points and fields that produced the conditions for the normalisation of partition and also presents the Cyprus problem as viewed from the outside. The chapters approach Cyprus’ division in light of power relations in society, the interaction between the political elite and society, and discuss the political and ideological dynamics as manifested in the public sphere. While analysing primarily the Greek Cypriot community, the book also refers to parallel developments in the Turkish Cypriot and international communities, arguing that the normalisation of Cyprus’ partition is rooted in the political economy and political culture of Greek Cypriots. At the same time, from the perspective of the peace and reunification movement, this is an inherently contradictory and potentially unstable process that can be overturned.

‘Α remarkably thorough study focusing on nationalist narratives, political and media discourses and socio-economic structures in Cyprus and their impact on the formation and transformation of political identities since the 1950s. Unlike many other books on the issue, Ioannou analyses social and political developments in both the Greek-Cypriot and the Turkish-Cypriot communities. This approach sheds light on the internal reasons of the perpetuation of the island’s division, which the geopolitical and international relations approaches alone miss to grasp. Combining the analytical skills of a political scientist and his personal experience as an engaged citizen in favour of unification, Ioannou offers significant insight on a complex and traumatic conflict that remains one of Europe’s black spots.’

‘The basic argument of the book is that the consolidation of partition was neither automatic nor happened behind the backs of Greek Cypriots. The very interesting and demythologising work of Gregoris Ioannou brings to light a hidden, but common secret of the Greek Cypriots.’

‘Ioannou projects a multi-focal spotlight on the Cyprus problem, so as, at least for the careful reader, this becomes not only an interesting topic in itself, but, also a cognitive springboard from which to understand broader pathogenies of our common social and political life.’