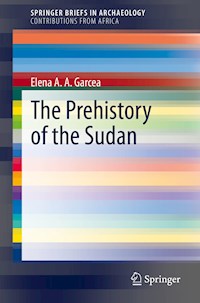 The Prehistory of the Sudan E-Book

This volume addresses the Out-of-Africa dispersals of the earliest hominins and early anatomically modern humans, the last semi-sedentary, pottery-bearing hunters-fishers-gatherers, the early food producers and users of domestic plants and animals either local or imported from the Near East, and the presuppositions of the rise of the kingdoms of Kerma, Pharaonic Egypt, and Axum on the basis of the latest available data.

Sudan played a crucial role in the development of ancient human behavior and societies and was part of an extensive network encompassing faraway areas of Africa, such as Chad, the Sahara, Egypt, Eritrea, Ethiopia, and Kenya, as well as Asia, namely the Levant, the Middle East, the Arabian Peninsula, and India. The archaeology of this country has been explored and appreciated since the 1700s and more than 30 national and international research teams are currently active. New remarkable discoveries are unearthed every year, which are analyzed with the most up-to-date scientific techniques, and offer a prominent contribution to the general theoretical and methodological panorama of world archaeology. Beside the Nile Valley, the various geographical regions of Sudan – the deserts, savannas, and other watercourses to the west and east of the main river – are attentively taken into consideration as they formed a regional synergy that equally contributed to the far-reaching influence of Sudan’s inhabitants.

This book is particularly addressed to Africanist archaeologists who study other parts of Africa; to prehistorians investigating other parts of the world; to archaeology students and teachers interested in having a global view on human adaptation and behavior in ancient Sudan; to science journalists, and to antiquity admirers and learned tourists who travel to Sudan and Nubia.