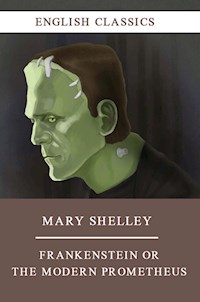 Frankenstein or The Modern Prometheus E-Book

Frankenstein or The Modern Prometheus is a novel written by Mary Shelly that tells the story of Victor Frankenstein, a young scientist who creates a hideous, sapient creature in an unorthodox scientific experiment. Shelley started writing the story when she was 18, and the first edition of the novel was published anonymously in London on 1 January 1818, when she was 20. Her name first appeared on the second edition, published in 1823.
Frankenstein is infused with elements of the Gothic novel and the Romantic Movement. At the same time, it is an early example of science fiction. It has had a considerable influence in literature and popular culture and spawned a complete genre of horror stories, films and plays.
Since the novel’s publication, the name “Frankenstein” has often been used to refer to the monster itself.