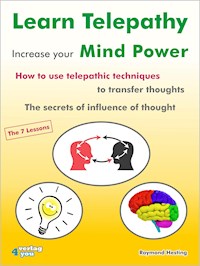 The power of thought? How is it possible? Every thought contains within it the power of thought - your thoughts, too. You only need to know how to recognise, strengthen and apply the power of thought. The secret of telepathy. The laws of the transfer of thought. The 7 lessons. Imagine welcoming a visitor, who has arrived only because you have personally chosen and invited them to visit you by the sole power of your thoughts. Numerous opportunities with friends or strangers, anywhere you like, will confirm your "fantastic" ability. Through the experiments provided, you will experience the mysterious power of telepathy and the influence of thought. SAMPLE EXCERPT: AN EXPERIMENT ON THE STREET... Excerpt from the chapter "A simple experiment on the street" in the third instructional part (page 16): ... if you would like to test the power of your thoughts using the technique of building up thoughts - as explained clearly in the 2nd part - carry out the following experiment out on the street: Look calmly and fixedly at the back of the head of a person walking in front of you (at a distance of between 6 metres and 25 metres). Together with the thoughts that you have already built up inside yourself, visualise the person in front of you turning their head towards you. The more you have built up your thoughts, and the more vividly and strongly you imagine the person to be turning their head, the faster your success will be. Don't make any noise whatsoever. No coughing or clearing your throat, and don't make your footsteps become heavier. The connection may only take place through your thoughts and through your imagination ... Try it yourself and you'll be amazed as, with a sufficient build-up of thoughts, this and similar experiments have a high rate of success. 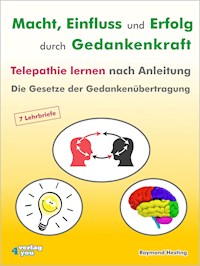 How to use telepathic techniquesto transfer thoughts

The secrets of influence of thought

All Rights Reserved. Reprints, copies, reproduction of any type, even as excerpts, are prohibited. This work, either as a whole or in part, may not be distributed, disseminated, copied or reproduced in any way or form (photocopied, electronically saved, or any other method or process), either for personal, educational, or commercial use unless by written authorization has been granted by verlag4you.

The Laws of Thought Power

Every Goal can be Reached through the Power of Your Thoughts

How to Strengthen the Power of your Thoughts

How to Radiate your Thoughts

Influencing others through Thoughts

A Simple Experiment on the Street

An Experiment in the Cinema or Theatre

An Experiment with Friends

Another Method of Infuencing Acquaintances Remotely

What is Important with Telepathy

The Experiments of Dr. J. B. Rhine

Another Experiment under Hypnosis

What is the Sixth Sense?

Practical Instruction for the Lottery

The Secret of Mental Healing Power

Thought Power and the Small Things of Everyday Life

How Thoughts can Compel Love

How Thoughts can Compel Faithfulness

Perception of the Future

Facts About One’s Perception of the Future

Development of the Inner Voice

Removing Inhibitions and Mistakes through Thoughts

Most people believe that every force of nature, including nuclear power, has already been explained and researched in detail. We can use forces like electricity, magnetism, gravity as well as nuclear power, but we can’t explain them in a way which covers all the facts and details. A surprise for you?

Believe it. Different natural phenomena produce outcomes which are determined by the acting forces. By pure observation, certain laws have been discovered which explain how those forces function and these laws have been confirmed through experiments, even though man does not fully understand those underlying forces.

Hence it is possible to use a force which may not be fully understood, because we can see the effects of that force. Likewise, one can have a mental image without seeing the real thing.

The laws which describe underlying forces allow for their wide and systematic use. Theories have been hypothesized which provide an intellectual explanation of observed laws, even though the actual force cannot be completely understood. Such theories attempt to explain everything connected with their related forces.

There are theories about electricity one of which is the theory of electrons which is universally accepted. Magnetism is explained by molecules of magnetic elements aligning according to certain lines of force. Gravity is seen as the effect of gravitational attraction and whilst new theories about nuclear power are being proposed, old ones are being discarded. We know the laws but cannot fully explain the underlying force itself. With only few exceptions are those laws permanently valid and the science universally accepted.

We learn different theories at school and consider them as real as simple mathematics, such as saying that two apples plus two apples make four apples.

As a consequence we don’t really fully think those theories through, and subsequently we acquire new knowledge and formulae which are “nearly” true but then these are replaced subsequently by new insights within a few years.

This is true for gravity, electricity and magnetism. Before long, new insights will have reached a state that will necessitate basic changes of the universally accepted theories.

In nature – of which man is part – unknown forces are at work. Certain laws concerning different forces within man are already known. However, experiments with chemical substances, magnets or electrical power-lines are totally different from those of experiments with a living person. Therefore the development of easily understandable and universally valid theories has not been possible so far with mankind.