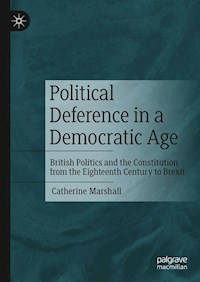 This book explores the concept of deference as used by historians and political scientists. Often confused and judged to be outdated, it shows how deference remains central to understanding British politics to the present day. This study aims to make sense of how political deference has functioned in different periods and how it has played a crucial role in legitimising British politics. It shows how deference sustained what are essentially English institutions, those which dominated the Union well into the second half of the twentieth century until the post-1997 constitutional transformations under New Labour. While many dismiss political and institutional deference as having died out, this book argues that a number of recent political decisions – including the vote in favour of Brexit in June 2016 – are the result of a deferential way of thinking that has persisted through the democratic changes of the twentieth century. Combining close readings of theoretical texts with analyses of specific legal changes and historical events, the book charts the development of deference from the eighteenth century through to the present day. Rather than offering a comprehensive history of deference, it picks out key moments that show the changing nature of deference, both as a concept and as a political force.