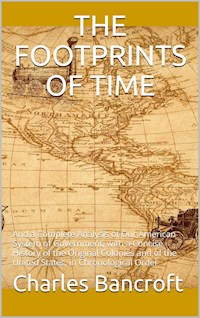 And A Complete
Analysis
Of Our American
System Of Government,
With A
Concise History Of The Original Colonies
And Of The United States, In Chronological
Order: Facts And Statistics
From Official
Sources

It is the object of this book to supply the means of forming an accurate idea of the American government. The author has adopted the proposition that the highest style of government is one “of the people, by the people, and for the people,” and believes that a constant progress, commencing in the earliest times, has reached its full development in the Great Republic. He therefore traces The Footprints of Time through all history; notes the gradual unfolding of institutions, the rise and fall of empires, the causes that produced and destroyed the ancient republics, and the origin of the forces that give so much more strength and stability to modern civilization. All this he considers essential to a correct appreciation of the wonderful events of our age and country.

He then proceeds to a close and clear analysis of the whole structure of the government. Each general division, with its sub-divisions, is examined in detail, but successively; so that a definite picture of it, with all its branches, operations, and relations to other parts, stands before the mind as a sharply defined whole. The Executive, Legislative, and Judicial divisions—the dependent parts of each kept in proper place—come in order, one after the other, before the mind, the structure, powers and working of each being fully explained.

The book is indeed a compilation, and the matter in large part from official sources, but collected from an astonishingly large number of books, all of which are not to be found even in the largest public libraries; but the labor and merit of gathering so much from all directions and compressing a library into a form and compass so convenient, and so well arranged, in so few and well chosen words, has been great indeed.

All the works heretofore brought before the public proposing to meet this want have been fragmentary, or have treated at too great length but a portion of the subject. A complete summary, or Citizens’ Manual, is here furnished, that includes a sufficiently detailed Analysis of the entire structure of the government, developing in a clear and comprehensive manner the organization, powers, relations, and mode of working of each department, small or large, the principles on which they rest and the spirit that permeates them all. It lays our history so far under contribution as to show us the occasion that produced each institution, the gradual growth of the grand edifice and the causes that controlled and shaped the whole. In short, it gives us an adequate reason for the form of our institutions, even so far back as the earlier history of humanity, when the tendencies that have borne this fruit first began to appear in human history.