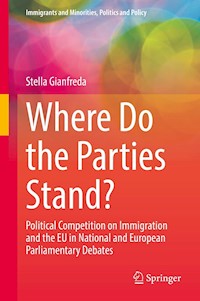 Where Do the Parties Stand? E-Book

This book analyses the politicization of immigration and the European Union in Italy, the UK, and the European Parliament (EP) from 2015 to 2020. The book uses the case studies of Italy, the UK, and the EP to study party positioning specifically towards immigration and the European Union, to understand to what extent mainstream-left, mainstream-right and populist parties adopt different framing strategies to compete on the new cultural dimension created by globalization. The book draws on saliency theory, issue ownership theory, and yield theory to investigate the multidimensional nature of political competition, and the relevance of institutional settings in determining party framing strategies. Bridging two fields that typically do not interact—party politics and migration studies—this book fills gaps in the academic literature and as such will be appropriate for students and researchers interested in party politics, European politics, immigration politics, populism, and text analysis.